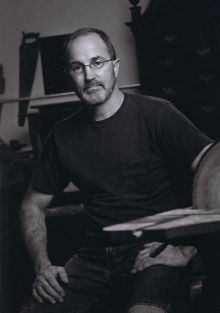 Jeff has built hundreds of period pieces of furniture in the style of Queen Anne, Chippendale, Jacobean, William and Mary, and Federal styles in his distinguished career.

Jeff started his career at North Bennet Street School studying with Phil Lowe, Lance Patterson and George Fullerton. This is where he fell in love with traditional furniture making and received a solid foundation in joinery, design, carving and building technique. One of  his main passions that he discovered while at school was carving. Carving came naturally to him and would prove to serve him well in his career.

After years of building for others, he moved to New Hampshire in 2007, started his own business and soon became an award winning member of the League of New Hampshire Craftsmen as well as juried member of the prestigious New Hampshire Furniture Masters Association, a highly selective group of studio furniture makers in New England.  Some of the accolades in the last 8 years include a number of League of New Hampshire Craftsmen Fair Living with Craft Exhibit Awards including: 'Best in Traditional Design' for his  Newport Lowboy in 2013; 'Best in Wood' for his Newport Tea Table in 2011; 'Best in Traditional Design' for his Pie Crust Tea Table in 2010; and 'Best in Wood' and 'Public Choice Award' for his  Newport Style Desk on Frame in 2008.  He has been part of the New Hampshire Furniture Masters Prison Outreach Program since 2012 teaching high-level woodworking skills to inmates of the Concord Prison System.