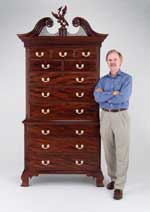 Dennis Bork's father was a journeyman wood patternmaker, so Dennis grew up around woodworking, making things in his father's workshop. He got a degree in physics and worked in that field for three years. He loved physics, but decided to change fields and took an apprenticeship as a wood patternmaker, like his father had done. Bork took his early training and work and combined it with frequent trips to museums to study period pieces. He has amassed an extensive library and says he believes in attending seminars and classes to continue his education.

Dennis has been chosen for the "Early American Life" magazine Directory of Traditional Crafts for over 19 consecutive years, (1994-2012).

Furniture in the SAPFM Gallery