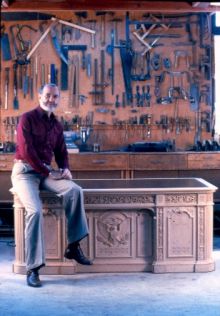 Robert's father was an artist and an antique collector. From 1948 to 2011, Robert restored antique furniture for major antique dealers, private collectors, museums, state and government institutions.

His works are exhibited in the permanent collections of the National Museum of Fine Arts, the Smithonian, the Philadelphia Museum of Art, Independence Hall, and many other museums and private collections.