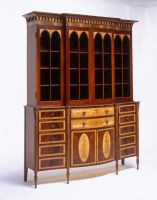 Bob was an inaugural member of SAPFM in 1999, helped establish the criteria for the Cartouche Award, and for many years was chairman of what is now called the Cartouche Award Selection Committee. With SAPFM member Brad Ormsby he founded the Southern California chapter and has contributed for many years to its success and growth. Following a highly successful 30-year health and space science career in the Navy, during which time he vigorously pursued art and woodworking hobbies, he pursued a second full-time career as a fine woodworking cabinet maker, including instruction for others.

For nearly two decades Bob was the Coordinator of the Design in Wood Show in Del Mar California, one of the largest international juried woodworking shows in the nation with over 350 yearly entries and nearly 1 million visitors each year.  Throughout these years he became active in the impressive San Diego Fine Woodworking Association, all the while continuing his support for SAPFM and pursuing additional teaching and mentoring opportunities with youth in the community and with his woodworking peers.

Bob’s furniture efforts eventually focused on the Federal Period, and he has entertained and educated SAPFM members with his impressive pieces shown in our publications and in our midyear meeting furniture displays.

Bob has the following pieces in the SAPFM Gallery: