For more than 20 years, The Society of American Period Furniture Makers has been committed to providing our members with the best in fine furniture making education. We provide this service through our symposiums, publications, chapter meetings, and on-line resources.

SAPFM holds two national Conferences a year. Our winter event is held in Colonial Williamsburg and the summer mid-year event meets at various venues. Both events are packed with instructional sessions, social time, and historical tours.

Local chapter are the backbone of SAPFM. These groups of woodworkers meet several times a year to learn important skills for period furniture making. These smaller groups are an excellent opportunity to learning hands-on and meeting with fellow furniture making enthusiasts.

SAPFM publishes an annual printed journal featuring articles on furniture making, history, and techniques. A quarterly newsletter is emailed to all members featuring chapter news, events, and other articles covering construction and techniques.

Our website contains a wealth of information for the furniture maker.  We have articles covering all aspects of period furniture, furniture construction plans, past conference notes, research papers, manuals, tool and book reviews, and curated lists.

Members from the woodworking community exchange ideas on our forum. Topics include tools, veneering, carving, books, conservation, and furniture repair to name a few.

Many of our members display pieces that they have made on our gallery. There you will find many original works and museum reproductions.

Becoming a member of SAPFM opens a whole new world of learning. Our web-sites has plans available for download. We publish an annual Journal and quarterly newsletters covering construction, history, and commentary on period furniture. Our two annual conferences get you up-close to furniture making and the skilled craftsman who show you the techniques used. You can get involved in local chapters where you learn from fellow members and show off your work.

American Period Furniture Throughout the Decades

Named after William III and Mary II the co-regents of England of this era. This is one of the first styles to be produced in the colonies. It is a variation on Anglo-Dutch style and is characteristic of Baroque with features such as elaborate turnings, severe curves, and case pieces with simple flat surfaces and architectural trim. Commonly constructed of walnut, oak, pine, and maple.

The Pennsylvania Dutch period was marked by heavy German influences. The pieces were simple and utilitarian, with the predominant decoration colorful hand-painted scenes. The furniture from this period features straight lines, simple turnings, and tapered legs made from walnut, oak, and pine.

This style blends elements from the proceeding William and Mary period. It is named after the English monarch who reigned from 1702 to 1714.  It is ornate and often characterized by the newly introduced cabriole leg, curving chair crests, and decorative scallop and shells, and volutes.

Queen Anne became popular in the United States due to the expanding wealth of colonist. Cities were expanding at the same time. With this came regional variations such as Newport, Rhode Island, and Philadelphia adaptations. Common woods include cherry and mahogany.

Chippendale furniture is named after English cabinet maker Tomas Chippendale and derived from his book The Gentleman and Cabinet-Maker’s Director. This was first furniture style named after a cabinet maker and not a monarch. It is closely related to the Queen Anne style. Designs fall into three main styles: Gothic, Rococo , and Chinese.

Mainly characterized by the style of the legs and feet including the lion’s paw, ball and claw, Marlborough, club, and spade. Chair backs are often intricately pierced and carved with ribbon motifs. Pieces were normally made of dark woods indigenous to the area.

The Shaker period was named after a religious movement of the period that had guiding principles of simplicity, utility and honesty. Their furniture was a reflection of these principles. Ornamentation was replaced with asymmetrical drawer arrangements and multipurpose forms to add visual interest. The appearance was primarily straight lines, doors with flat panels, woven or cane seat material, basic turned wooden knobs, and visible locking joinery. These underlying principals continue to give inspiration to modern furniture makers.

The Arts and Craft period symbolized a minimalist period in furniture design. Started by William Morris, it was a revolt against furniture made during the Industrial Revolution. The Morris Chair is one iconic piece from this period. In America, Gustav Stickley, Elbert Hubbard, Charles Limbert, and Greene and Greene were well know makers of Mission-style furniture.

Common materials included leather for upholstery and quarter sawn oak. The oak is fumed with ammonia for a distinctive brown color.

Enjoy the Many Benefits of SAPFM Membership

The name "Davenport" comes from a reference in the records of an 18th-19th century English furniture maker Gillows. The reference, in about 1795, gives the original design and says that it is a desk for a Captain Davenport. To my knowledge, no record of a Captain Davenport has ever been found from this period. However, the names (Captain's desk or Davenport desk) stuck and the design has been popular ever since. Typically, it is a small slant top desk, no more than 2 feet square with 4 drawers on the right hand side and 4 false drawers on the left hand side. The style evolved over the decades and piano top versions, like the one I built, date from the mid-19th century. 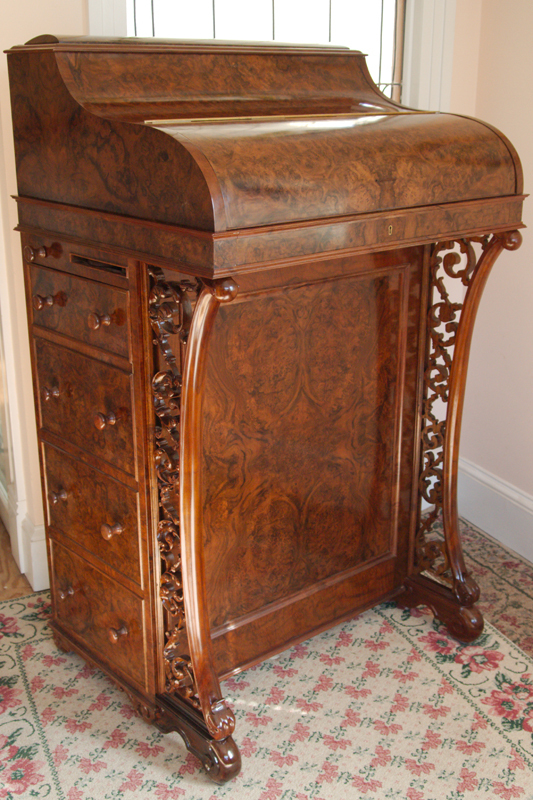 My Davenport saga began about 15 years ago when I ran across pictures of an antique Davenport by Blain of Liverpool. It was said to be made from burr oak and figured walnut. I was struck by the graceful transition from the writing surface to the feet, and by the carved base. In contrast, most Davenports have what I consider to be awkward transitions and plain bases. There were no dimensions and the pictures were not the best, but, as we all do sometimes, I stowed them away "for the future".

Fast forward a dozen years and I decided that the time had come to build this Davenport. I still had not done any carving, but I had accumulated a nice collection of antique carving gouges. I had also built a carving platform and a version of Al Breed's cabriolet leg vise sufficiently long to hold those long transitional pieces. Finally, I had done enough hammer veneering (e.g. Member's Gallery, Pins & Tails, Winter 2017) to want to tackle some burl veneer. Thus, I decided to cover the entire desk in walnut burl with figured claro walnut moldings and black walnut carvings.

Little did I know that I was embarking on a three year journey, a journey which would not only include learning to carve and to deal with modern burl walnut veneer, but also to make hardware pieces which are no longer available, such as the full width brass hinge for the piano top.

I should mention at this point that I am a design-on-the-fly kind of woodworker. I may make lots of sketches, puzzle out dimensions and ponder solutions, but I never wait until I have detailed plans to start. In fact, this project was my first use of Sketchup and that was only to scale the pictures I had of the "inspiration" desk. So, it should come as no surprise that rather than try to build a reproduction, I decided to use it as inspiration for what I really wanted – an over-the-top stand up computer desk.

How do I define a computer desk? Well, first of all, I wanted it to contain a desktop-class computer, a printer, and a scanner. These are two peripherals that I use regularly. A Davenport is ideal for this since it features four drawers on the right hand side. In mine, the top drawer is for a flatbed scanner, the second drawer contains a printer and the bottom two drawers are combined to house the computer.

A major objective for this project was to hide all of this modernity in such a way that it would look and function as nearly as possible like my inspiration desk. In other words, anyone could use this desk just as they would have in the middle of the 19th century. However, I quickly realized that, since I wanted to use a keyboard and mouse to control the computer, I would have to violate one of the cardinal features of a Davenport desk, its size.

The roughly 22" between the wings of a typical piano top Davenport is just not enough width to comfortably us a keyboard and mouse. Thus, I decided to expand mine to 30" wide, and still 24" deep. Another issue was how do you hide a monitor? Here again, the piano top Davenport is a useful inspiration. All of the ones I have seen feature popup banks of cubby holes, just asking to be replaced by a monitor. This, however, also required a significant modification to my inspiration desk. The serpentine top of the inspiration desk is too tall.

Ergonomically, the top of a computer monitor should be at your eye level. Measure the distance from your elbow to your eyes and you will see how little space there is to work with. The serpentine top on my desk needed to be less upright (more laid back?) than the inspiration desk to hold a reasonable monitor and the monitor riser would have to handle a 12" rise. One result of this modification is that the available gallery height is reduced to only 5". 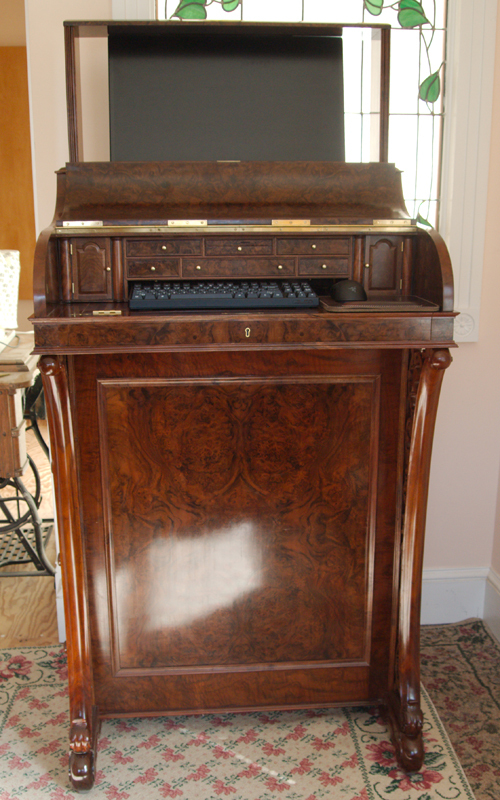 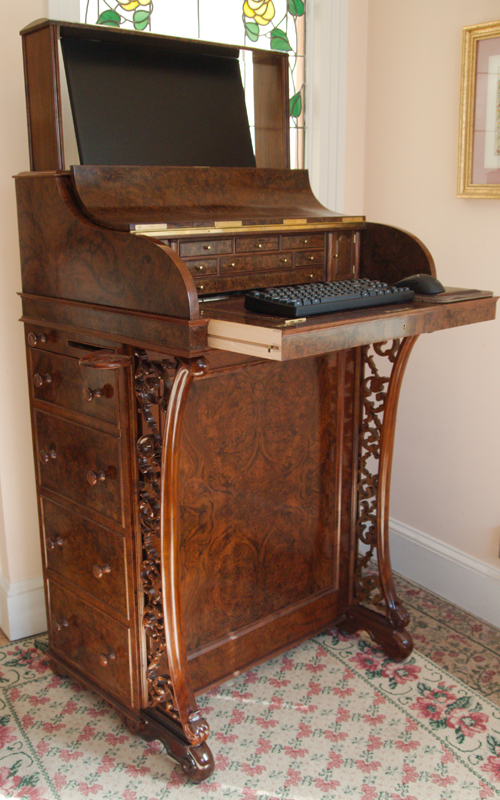 I decided to replace the gallery of the inspiration desk, for both aesthetic and functional reasons, with a gallery that contains two small prospect boxes, one on each end, with two rows of drawers in between. The two prospect boxes hide all the computer ports and electrical switches to control the computer functions (and, yes, there are small secret compartments behind the columns). For nostalgia reasons, I wanted to support a DVD drive. The upper half of the middle top row drawer conceals a DVD drive. Note: in some of the pictures it looks like there are three rows of drawers. The third row is just a fake drawer front. It is only visible when the writing surface fully is extended. Otherwise, it acts as the back of the storage compartment under the two rows of drawers, a convenient place to stow a keyboard and mouse.

These changes were primarily functional in nature; they made it a better computer desk. Other changes were more aesthetic in nature. For example, the necessary depth of the monitor riser meant that there was a significant blank space above the scanner drawer. Part of this space was filled with a knob which controls the locking down of the monitor riser. The rest of the space is a slot for a swing out candle holder (ok, coke can holder). This holder was inspired by a 1/12 scale model I saw of an architect's desk. We take our inspirations where we find them.

Once I had decided to cover the desk in burl walnut veneer, I knew that the front and back of the drawer section and the serpentine piano top would have to be 4-way book matched. As a result, and to maximize the selection of burls available, I decided to go with a frame-and-panel design for the sides. The frames are poplar and the panels are glued up from sugar pine. Hard maple was also used elsewhere as a secondary wood.

A last minute change was the nature of the filigree panels on each side. On the inspiration desk, these were fret sawn. By the time I got to them, I was comfortable enough with carving to decide that they would be more dramatic carved. The design is based on Mary May's Rococo Acanthus Frieze design from her Charleston fireplace surround, although mine is only about half scale. Finally, I added a bit of bling. A strip of edge-emitting LEDs is mounted in the moulding above the gallery. Activated by a touch switch inside one of the prospect boxes, it lights the writing surface.

More pictures of Joe’s desk, along with images of the antique desk he used for inspiration are available onlineat: https://fangornworks.smugmug.com/Woodworking/Davenport-desk/