For more than 20 years, The Society of American Period Furniture Makers has been committed to providing our members with the best in fine furniture making education. We provide this service through our symposiums, publications, chapter meetings, and on-line resources.

SAPFM holds two national Conferences a year. Our winter event is held in Colonial Williamsburg and the summer mid-year event meets at various venues. Both events are packed with instructional sessions, social time, and historical tours.

Local chapter are the backbone of SAPFM. These groups of woodworkers meet several times a year to learn important skills for period furniture making. These smaller groups are an excellent opportunity to learning hands-on and meeting with fellow furniture making enthusiasts.

SAPFM publishes an annual printed journal featuring articles on furniture making, history, and techniques. A quarterly newsletter is emailed to all members featuring chapter news, events, and other articles covering construction and techniques.

Our website contains a wealth of information for the furniture maker.  We have articles covering all aspects of period furniture, furniture construction plans, past conference notes, research papers, manuals, tool and book reviews, and curated lists.

Members from the woodworking community exchange ideas on our forum. Topics include tools, veneering, carving, books, conservation, and furniture repair to name a few.

Many of our members display pieces that they have made on our gallery. There you will find many original works and museum reproductions.

Becoming a member of SAPFM opens a whole new world of learning. Our web-sites has plans available for download. We publish an annual Journal and quarterly newsletters covering construction, history, and commentary on period furniture. Our two annual conferences get you up-close to furniture making and the skilled craftsman who show you the techniques used. You can get involved in local chapters where you learn from fellow members and show off your work.

American Period Furniture Throughout the Decades

Named after William III and Mary II the co-regents of England of this era. This is one of the first styles to be produced in the colonies. It is a variation on Anglo-Dutch style and is characteristic of Baroque with features such as elaborate turnings, severe curves, and case pieces with simple flat surfaces and architectural trim. Commonly constructed of walnut, oak, pine, and maple.

The Pennsylvania Dutch period was marked by heavy German influences. The pieces were simple and utilitarian, with the predominant decoration colorful hand-painted scenes. The furniture from this period features straight lines, simple turnings, and tapered legs made from walnut, oak, and pine.

This style blends elements from the proceeding William and Mary period. It is named after the English monarch who reigned from 1702 to 1714.  It is ornate and often characterized by the newly introduced cabriole leg, curving chair crests, and decorative scallop and shells, and volutes.

Queen Anne became popular in the United States due to the expanding wealth of colonist. Cities were expanding at the same time. With this came regional variations such as Newport, Rhode Island, and Philadelphia adaptations. Common woods include cherry and mahogany.

Chippendale furniture is named after English cabinet maker Tomas Chippendale and derived from his book The Gentleman and Cabinet-Maker’s Director. This was first furniture style named after a cabinet maker and not a monarch. It is closely related to the Queen Anne style. Designs fall into three main styles: Gothic, Rococo , and Chinese.

Mainly characterized by the style of the legs and feet including the lion’s paw, ball and claw, Marlborough, club, and spade. Chair backs are often intricately pierced and carved with ribbon motifs. Pieces were normally made of dark woods indigenous to the area.

The Shaker period was named after a religious movement of the period that had guiding principles of simplicity, utility and honesty. Their furniture was a reflection of these principles. Ornamentation was replaced with asymmetrical drawer arrangements and multipurpose forms to add visual interest. The appearance was primarily straight lines, doors with flat panels, woven or cane seat material, basic turned wooden knobs, and visible locking joinery. These underlying principals continue to give inspiration to modern furniture makers.

The Arts and Craft period symbolized a minimalist period in furniture design. Started by William Morris, it was a revolt against furniture made during the Industrial Revolution. The Morris Chair is one iconic piece from this period. In America, Gustav Stickley, Elbert Hubbard, Charles Limbert, and Greene and Greene were well know makers of Mission-style furniture.

Common materials included leather for upholstery and quarter sawn oak. The oak is fumed with ammonia for a distinctive brown color.

Enjoy the Many Benefits of SAPFM Membership

It’s with a heavy heart that I write of the passing of one of America’s master period furniture makers, Phil Lowe. I’ve known Phil for over 30 years and was privileged to have worked side-by-side with him on many occasions at his workshop in Beverly, Massachusetts, as well as at many of the SAPFM conferences and presentations in which he participated. 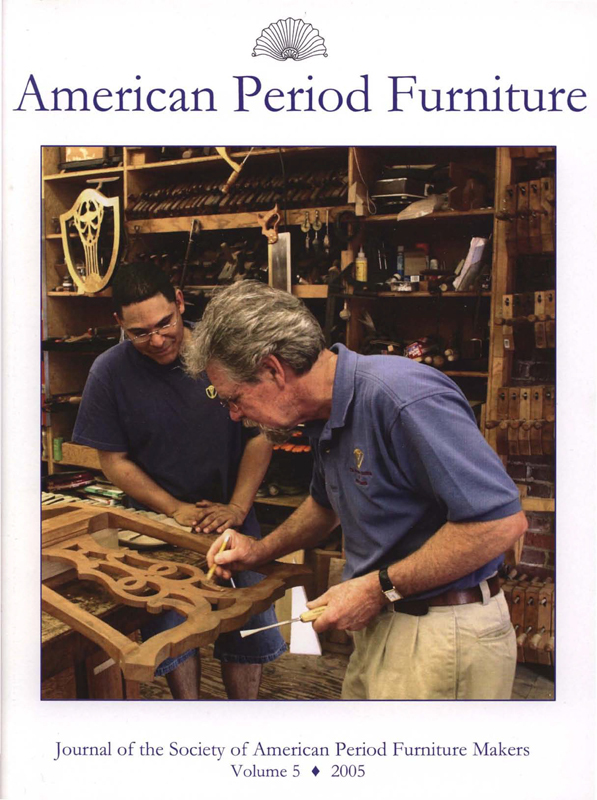 I first met Phil in 1987 while working part-time at the Woodcraft store in Woburn, Mass. I was then a student at the North Bennet Street School (NBSS) in Boston. I immediately recognized him as he came into the store as I had already felt like I knew him from watching some of his early videos produced by Fine Woodworking along with the numerous articles he had already written for the magazine. What I distinctly remember from that first meeting as I helped him look at wood-turning tools was his very friendly and appreciative mannerisms. I took the opportunity to tell him how much I enjoyed his videos and articles and mentioned that I was attending NBSS. Knowing that he spent time at NBSS as a student and instructor there, I spent some time talking with him about woodworking in general. In that brief encounter I could see how passionate he was for the craft. Little did I know at the time, that meeting would be the start of a life-long friendship. 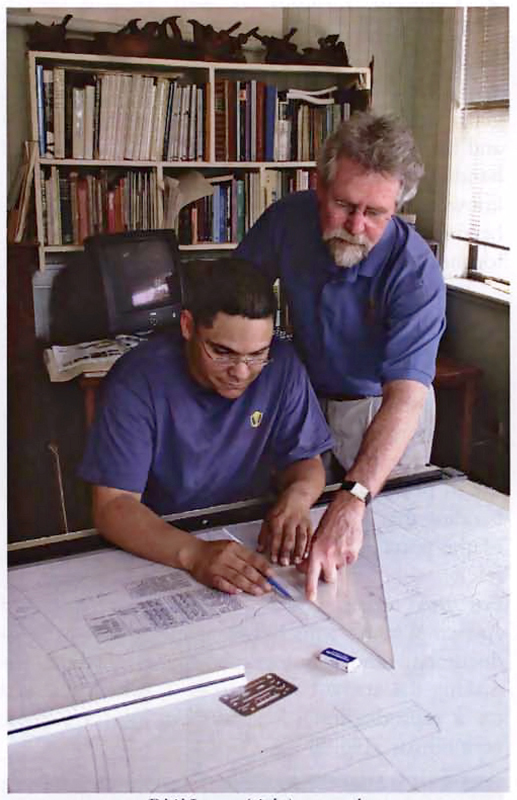 I would like to remind SAPFM members that Phil was the recipient of the Cartouche Award in 2005. In addition, I wrote an article about Phil in Vol. 5 of The Journal of the Society of American Period Furniture Makers (APF). The title of the article is “Philip C. Lowe: A Glimpse Into His Life and Work.” Since I wrote that article, Phil touched many additional lives while founding and running his school, the Furniture Institute of Massachusetts, at his Beverly, Mass. location.

Having known Phil for some time, I realize it’s hard to not recognize his extraordinary talent as a craftsman and teacher. However, I see so much more. He was a loving husband to his wife Sandra; as a father to Sonia and Vivian; mentor, writer, and scholar, sailor, and most of all a friend to many.

Someone once said that Phil was a pragmatist inside a teacher and I would have to agree. To prove this, I would like to repeat a quote from Phil t 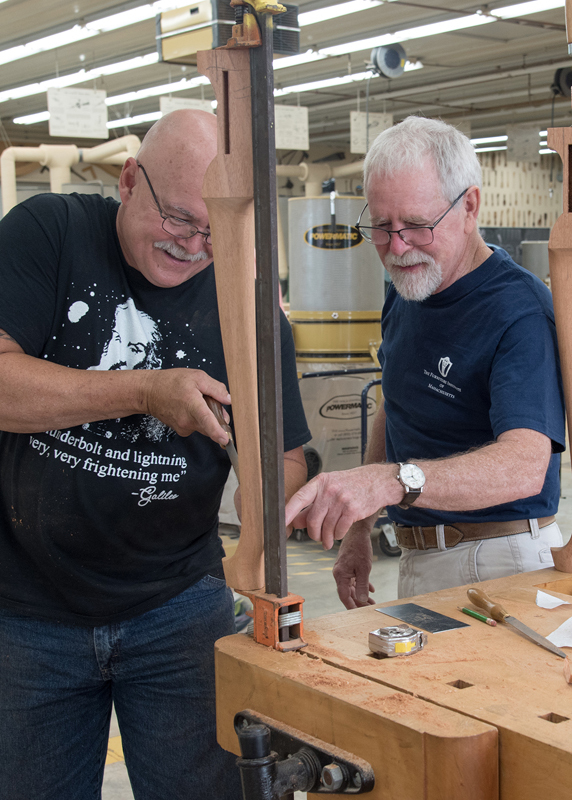 hat I used in my 2005 APF article: “When I look at a furniture masterpiece, I view it as a composition of rudimentary tasks that represent a wonderful endeavor of the human spirit; a collection of all that is simple into something that is grand.”

This quote demonstrates how wise and practical a man Phil was. While working for him, I remember a client asking him to restore an antique by relief-carving a sheaf of wheat. After the client left the shop, he said to me while laughing, “I never carved a sheaf of wheat before, but how hard could it be?” That was so true of Phil. He was always up to the challenge and approached each of them with his can-do spirit and innate talent.

The pandemic of 2020/2021 has been difficult for all of us. It deprived us of being close to many of our friends and family members. It also deprived us of being close to Phil and his family while he suffered from his terminal illness. Few of us really had a chance to say thanks for his contributions to our craft or to help console and comfort his loved ones during their time of sorrow.

Phil’s legacy is sure to endure because of all the lives he has touched along the way. From the students he trained to become furniture makers to those who became teachers who also passed on the knowledge and skills gained from his teaching and influence.

History will no doubt write much about Phil Lowe as we move forward. Yes, we will all miss you, Phil, but you will not be forgotten. May you rest in peace.